Skip to primary content
Skip to secondary content
Dear Rock Bottom Brewery, your nachos are a mixed bag. Love, Nachomission
“Brewery nachos” at Rock Bottom are listed with the following description on the menu: “Housemade tortilla chips with black beans, melted Cheddar and Pepper Jack cheese, tomatoes, jalapeños, cilantro and red onions. Served with salsa. Add guacamole, chicken or beef.”
Now you *know* I love a housemade tortilla chip so this was a great leadoff in the description. The idea of pepper jack was intriguing and I’m always on board with black beans. But wait, “add guacamole”? You know, guacamole really should be standard. Afterall, it is core to the goodness. Foundational, if you will. And it should be non-negotiable.
I arrived at Happy Hour time, around 4pm on a weekday, and took my seat at a table outside. My cheery mood quickly faded however when I found out there was no special on the nachos. They were $9.50. And I had to pay $1.25 more for the guacamole. What the….? And to make matters worse, as I was still simmering to a low boil over the lack of happy hour discount, I encountered a totally sticky table. And then something wet dripped on my leg from under the table. I don’t know what it was but it was blackish in color. I’m afraid this knocked my opinion down several pegs before even being served.
As I sat trying to get over the sticky, dirty liquid situation I found myself in, I was served my nachos. It was a presentation that is unparalleled. I have never seen anything quite like it. There was a large rectangle cutting board with parchment paper on top and a huge 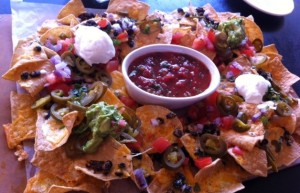 amount of nachos topping that. These nachos were wrapped around a bowl of salsa like some sort of festive, colorful, tasty, culinary wreath.
The crispy homemade chips were indeed very tasty. They had the right crunch factor. The cheese was tasty, but it was pretty standard. There was some pepperjack but I couldn’t identify it in taste. It may just have been jack, actually, because I didn’t see any pepper pieces or taste any tang. I just noted some melted white along with the orange cheese. And regarding the cheese, there just wasn’t enough. Let’s face it – you are never, ever going to read a review of mine that reads “there was too much cheese”. As long as it is good cheese, the more the better!
The black beans were good but they suffered from the same issue as the cheese – they were few and far between. They were sprinkled rather than piled. Peppered rather than scooped. Every bite of these nachos was spicy and I suspect the beans for this fiery goodness even though there were also jalapenos. I’m going to guess the beans were cooked with chili powder as I took note of some red specs on them. Bold and tasty!
The guacamole was good but again there was a major stinginess factor here. 2 small scoops? Really, Rock Bottom?? That’s all 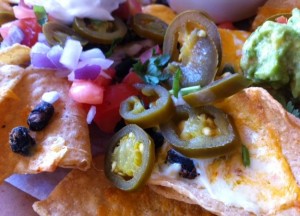 I get for paying $1.25 extra? I would have expected more than that if it had come complimentary. Especially considering the proportion to this large, cutting board slab of nachos. Only a few lucky bites involved a dip in the guacamole before it was gone.
Now let’s get to the salsa in the middle. I’m not going to sugar coat it – I didn’t like the flavor at all. I couldn’t place the initial taste but it wasn’t good. Fruity? Sweet? I don’t know. I had two dips in an attempt to identify it and decided I wasn’t subjecting myself to any more dips to place the flavor. I’m willing to do a lot for my readers but that’s where I draw the line. I will gladly say that the salsa fresca sprinkled onto the pile itself was quite good and head and shoulders above what was in the bowl.
Now I wouldn’t be the nacho reviewer you’ve come to love if I didn’t make one more comment regarding this experience. As previously mentioned, I sat outside. And let me tell you, there were flies. Many, many flies. They were everywhere! Constantly swarming, and attempting to land on the nachos themselves! The horror!!
Overall, these nachos were tasty but they could use a few improvements. The portion was huge overall but the toppings were not proportional. And, in the end, I just couldn’t overcome the ambiance issues. Shoo-ing away flies while my elbow sticks to the table and drops of black liquid drip onto my leg somehow made the experience less enjoyable. Go figure.
I give them 2 out of 5 smiling nachos.