Take me out to the ball game, Take me out with the crowd. Buy me some peanuts and cracker jack, I don’t care if I never get back. Let me root, root, root for the GIANTS, if they don’t win it’s a shame. Cause it’s one, two, three strikes you’re out at the old ball game. 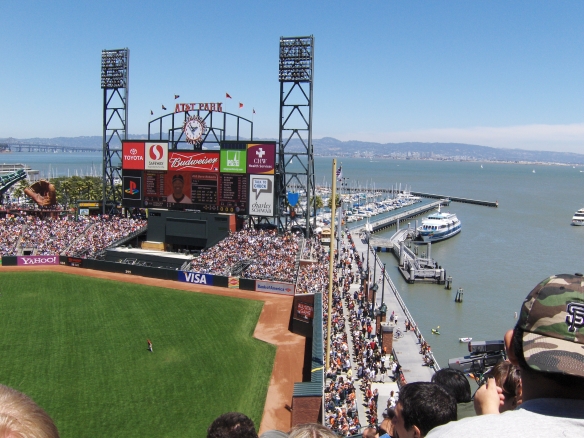 I love the Giants. I love AT&T park. At how many other ballparks in the country can a vegetarian like me enjoy the baseball tradition of a (veggie) hotdog? It was no surprise to me that AT&T park recently topped Peta’s annual list of vegetarian-friendly ballparks. And whether you are a vegetarian or a hardcore carnivore, AT&T park serves up tasty and somewhat surprisingly gourmet food. And all baseball (and all food, for that matter) is only that much better when you enjoy it looking at the most beautiful view offered by any ballpark. Period.

Ok, now let’s get down to the nacho business at hand. Like all ballparks, AT&T park does offer the standard nacho fare – stale round chips, pump cheese and optional jalapenos. I wasn’t having it. Instead, I paid a visit to the Tres Agaves Mexican Kitchen stand on the View Level. 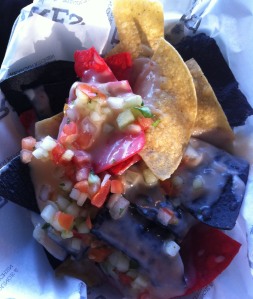 They had several meat options but I ordered the simple cheese nachos. Ok, yes, the cheese was liquid – they are a stand in a ballpark afterall. They operate in somewhat primitive conditions so let’s cut them some slack. Most importantly, and I can not stress this enough, it wasn’t pump cheese. The consistency wasn’t gelatinously thick but was more thin and smooth. The color wasn’t neon orange but instead was a pleasing creamy color. And when the friendly server offered me fresh pico de gallo on top, I, of course, responded with an enthusiastic “yes, please!”. They had other options available in little to-go containers that looked to be jalapenos and various salsas. Unfortunately, my hands were full with culinary goodies already acquired at some other stands along the way so I was unable to take any of these additional toppings.

The chips were tri-colored and yummy. The cheese had a nice, spicy flavor. The pico de gallo was indeed fresh – the tomatos were juicy, the onions added just the right kick, and in my book cilantro can do no wrong. 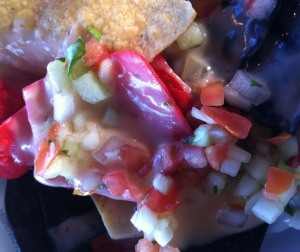 Alright, look. Were these the best nachos I’ve ever tasted? No. But for ballpark nachos, they were incredible. Pure awesomeness. Leave it to AT&T park.

Sadly, my Giants didn’t win on this particular evening, but I left feeling victorious for discovering these nachos. Well played, Tres Agaves! I give them 3 out of 5 smiling nachos.

As a parting gift to you, my nacho peeps, I leave you with one more peek at my beloved ballpark: 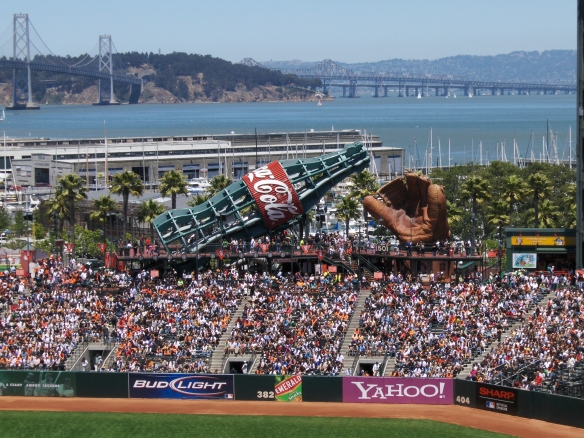